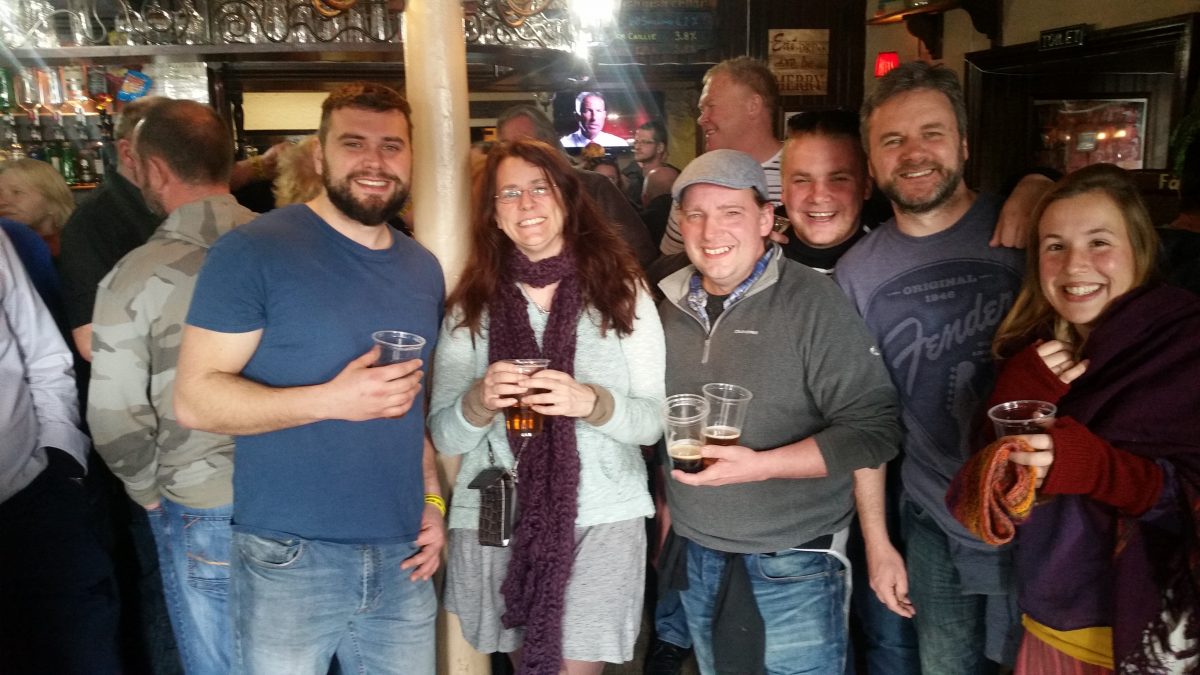 The particular house sit I am currently engaged here in Mull has a few responsibilities that come with it, mainly changing the sheets in between guests, laundry, general tidiness of the cottage and keeping the larder

The particular house sit I am currently engaged here in Mull has a few responsibilities that come with it, mainly changing the sheets in between guests, laundry, general tidiness of the cottage and keeping the larder stocked with the basics. (It is available on Airbnb… https://www.airbnb.co.uk/rooms/7218533)So far there have been three guests during my tenure- a family of three from England, a husband and wife from France, and a young woman named Emmanuelle from Belgium. She has also been traveling for the past year but has spent most of her time in Asia and we clicked right away.  When she arrived on Saturday, she informed me that there was a music festival going on in Tobermory, the largest town on the island.  We decided to attend together the following day. Tobermory is on the opposite side of the island from the cottage, and while I do have the use of the homeowners car, I wanted to have a few pints at the festival so driving was out of the question. So, for the first time in my life…I hitchhiked! Emmanuelle and I had no problem getting someone to stop. The first couple who took us as far as Salen were Scottish but not local, and drove a former ambulance kitted up to be a caravan. They had been to the festival the night before and gave us pointers and regaled us with stories of the prior evenings shenanigans. They even got us started on the road to party town by sharing their Magners Irish Cider. Our next ride took us into Tobermory as they were headed to the festival themselves. The road ran next to the water, and there were seals(!!!) sunning themselves on the rocks. The driver could tell I was excited (perhaps it was the squealing) and pulled over so I could get out and have a closer look. Tobermory may be the largest town on the island and the capital of the Inner Hebrides, but it still only has a population of about 1000. It is home to Mull’s only chain grocery shop (The Co-Op), and one of the four petrol stations on the island. The main street is right on the water, and as you walk down you pass many charming shops, pubs, restaurants and hotels. My favourite was the ‘Tackle and Books” shop. True to advertising! It even contained a pretty decent little art supplies section. (Also a whole section of ‘computer food’…whatever that is. I should have paid better attention but there were art brushes and paints and books…)

We also passed a pottery store, chocolate and sweet shop, leather shop, soap shop, jewelry boutique, outdoor clothing establishment , bakery and  ironmongers. Tobermory is also home to Europe’s first ‘Catch and Release Aquarium’. (Creatures stay at the aquarium for a maximum of 4 weeks before they are returned to the sea, so their displays are constantly changing) http://www.mullaquarium.co.uk  and the ‘Tobermory Distillery’ available for tours and a wee dram of their single malts. Of course, we weren’t there for shopping or Aquariums, we were there for Scottish music!! Our driver dropped us off at ‘The Mishnish’ pub at one end of the main street where the strains of a very vigorously played fiddle could be heard. And of course, we made a few friends. We stayed for two pints…(promising our friends we would be back in a bit)then strolled down main street to the other end of the town to see Tide Lines at Mac Gochan’s Pub and Restaurant. By this point we were hungry and needed something to soak up the pints, so back down main street we went, stopping briefly in a pub whose name I can’t remember to hear some bagpiping! (Albeit a baby bagpipe. Oh, I ended up dancing with the bagpiper in a different pub later on.)

Emmanuelle and I finally decided a chip shop was our best option for cheap, filling food, and there was a kiosk by the docks. Turned out, Emmanuelle had never tried this most famous of English food!(I was much amused however by Emmanuelle’s dismay at the lack of mayonnaise for her chips.) As we promised, we then headed back to the Mishnish. A new band was playing in the pub…and I was looking forward to more Scottish music when they burst into a rousing and very well received version of “Sweet Home Alabama“. This I was not expecting.

Since I had no desire to hear American country music, we moseyed next door to the Mishnish Hotel check out “The Mad Ferret Band”http://www.themadferretband.com/  These guys were awesome! (Sadly, I have no video as I had run out of memory already on my phone.)

Finally, it was half six and we knew we had to start thinking about getting home,although not before one last quick stop back at the other end of town to Mac Gochan’s Pub and Restaurant. I mean, it was on the way and all…

A few of our new friends saw us come in and waved us over, so we decided to stay for one more pint…as you do.  I was standing near the band (Beinn Lee Ceilidh )enjoying the company and lively music, when the tune suddenly changed and people rushed to the dance floor in couples. Oh good, I was going to see a traditional Scottish dance! Nope. Turns out I was going to DANCE a traditional Scottish dance. The bagpiper from earlier in the day came over,  took me by the hand and led me out onto the floor. Now, I am no slouch as a dancer, many years of ballet notwithstanding…but I had no idea what we were doing!  This poor man chose the one out of probably only two women in the pub who did not know the dance. For at least the first minute, he led (dragged) me around the floor until finally I got the hang of it and was able to dance WITH him. I must say though, I enjoyed it very much…the camaraderie and general bonhomie of my fellow dancers made up for my clumsy missteps. (I looked it up…the dance we did is called the Highland Barn Dance. See below…

Formation: couples around the room facing anti-clockwise, ladies on the right.

Now, I know it, and so do you, so you have no excuse if a Scotsman (or Lady) pulls you onto the dance floor.

Finally, after enjoying the music for a bit more, and using the loo( I know where every loo is on Main Street) we headed to the center of town to begin thumbing for a ride back home. There were not as many cars about and we ended up walking in the rain for a bit. Our first ride ended up being two American women in their 20’s from Tennessee on holiday, and the second a VERY kind Scottish couple who felt sorry for our wet and bedraggled selves and took us all the way home which was far past where they were staying.

I have to say, the experience was not what I was expecting at all. When I hear “music festival”, I tend to think of crowds of sweaty drunken people, lines of overflowing porta potties, and overcrowded venues. What we had here in Tobermory was basically just a jolly good party! Music and dancing in each pub with the attendees being from all ages…wee tots right up to old timers. Perhaps it was more laid back because it was Sunday, I don’t know. Everyone was so friendly and welcoming! We ended up seeing about seven bands, and had a fantastic day, even if we ended up a wee bit damp at the end. I’m looking forward to heading back into Tobermory to meet up again with a few of my new Scottish mates! Should you find yourself in Scotland , around the last weekend of April, I highly recommend you find the time to attend the festival, especially if you want to venture off the tourist path. Most of the attendees were Scottish, so you get to sample the true flavor of this most amazing country.